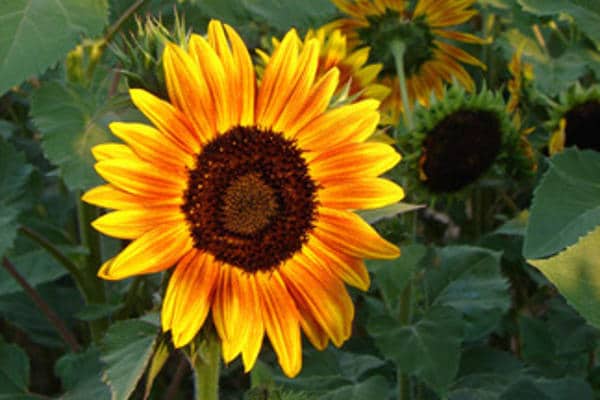 For Immediate Release
July 30, 2017
Contact:  Nancy Valentine
tubacval@msn.com
520-841-1404
Van Gogh Sunflower Paintout and Auction  to Support  Lowe House Project Artist in Residency on October 7th
Tubac AZ–Real sunflowers (if the javelinas don’t eat them) juxtaposed against The Historic Lowe House grounds and other Old Town Tubac buildings will be the inspiration for plein air artists during the Van Gogh Sunflower Paintout and Auction and Reception to be held at the Lowe House Project at 14 Calle Iglesia Old Town Tubac on Saturday, October 7th.
Artists will be painting throughout the day until 3:30PM when they will display their sunflower paintings in the Historic Lowe House galleries and grounds and the silent auction and reception will begin. Bidding will end at 5:00PM.
The event is a fundraiser for the Lowe House Project. Proceeds from the sale of paintings will benefit the artist and the artist residency program.
The Lowe House Project is a 501 (c) (3) non-profit organization providing live/work space and arts programming, workshops and “playshops” and collaborative community events presented by visiting artists. The programming is intended to foster creativity and develop educational projects via the arts supporting the tradition of “Tubac: Where Art and History Meet” and the cultural heritage of the Santa Cruz River Valley.
Famous painter, Vincent Van Gogh, started a series of paintings in 1887—130 years ago—featuring sunflowers that were highly acclaimed. It is reported that Van Gogh painted the series to impress fellow artist Paul Gauguin who eventually did buy two of the Van Gogh’s  sunflowers.
Nancy Valentine, manager of the of the Lowe House Project, said the paintout is also a celebration of Van Gogh’s creative genius. She hopes works created during the paintout will “impress” prospective buyers and help make one of the participating artists famous. “Short of that,” Valentine said, “I’m certain folks who buy the paintings will be happy to have an Old Town Tubac sunflower painting in their possession and to support the Lowe House Project and our participating artists.”
Portions of the Historic Lowe House date back to 1767 Spanish Colonial times. The building is named for William Lowe whose family, including wife Annie Burruel and “nine little Lowes”, occupied the building from the late 1800s to the late 1950s when William Morrow, called the “Father of Modern Tubac”, purchased the building. Early Tubac artists Hans and Marion Valentine purchased the building in 1965. The Historic Lowe House has afforded working artists live/work and gallery space ever since and continues as an artist in residency program today.
The Lowe House Project is a 501 (c) (3) non-profit organization now in it’s fourth year. Donations to the artist in residency contribute to on-going programming, subsidizing artist residents’ fees and preservation and upkeep of the Historic Lowe House.
For more information contact Nancy Valentine at Tubacval@msn.com.
# # #