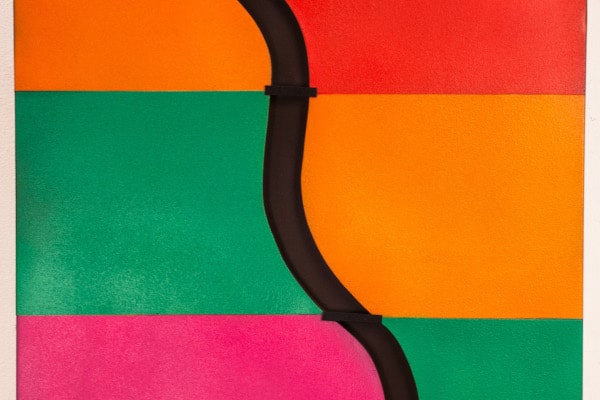 Tubac AZ—The binational Santa Cruz River, a waterway shared by both the United States and Mexico, is the focus of the Rio Compartido/Shared River exhibit opening on Saturday October, 19 from 4:00 p.m. to 6:00 p.m. at the Lowe House Project artist residency in Tubac.

The exhibit features the creative work by artists from both sides of the International Border and has been three years in development. The exhibit is complementary to the Smithsonian Institution’s national traveling WaterWays exhibit also opening earlier that day at the Tubac Presidio State Historic Park from 2:00 p.m. to 4:00 p.m.

Both exhibits are intended to expand awareness of our nation’s waterways as an environmental necessity and an important cultural element. The Rio Compartido/Shared River exhibit brings the message home of the significance of the regional waterway and unique shared responsibility for the Borderlands cultural and environmental heritage. The Santa Cruz River with headwaters in the US, flows south into Mexico crossing the International Border, makes a U-turn and returns to the US flowing through Ambos Nogales, the Santa Cruz River Valley towns and communities, including, Rio Rico, Tubac, Amado, Green Valley, Sahuarita and Tucson along its northerly 185-mile route.

Exhibiting Rio Compartido/Shared River artists were encouraged to participate in educational programming at locations along the river including hikes and tours of public parks, museums and the Nogales International Wastewater Treatment Plant. The educational programming was conducted by members of Friends of the Santa Cruz River, Lowe House Project, property owners and volunteers familiar with the riverine cultural and environmental characteristics. The immersion program afforded artists the opportunity of experiencing first hand the habitat, humanity, history and cultural heritage of the Upper Santa Cruz River basin. Accepted artists developed creative works reflecting their experiences with and perspectives of the Santa Cruz River.

The Rio Compartido/Shared River exhibit is being co-curated by Barbara Kuzara of Tubac, AZ and Ricardo Santos Hernandez of Nogales, AZ and Chicago Ill.

The public is invited to the opening reception when participating artists from both sides of the International Border will be present to discuss their perspectives of the Santa Cruz River as expressed through their creative work.

Some artists from Mexico and the US spent two weeks at the Lowe House Project artist residency. Elena Vega, a poet, musician, and mosaic artist from Nogales, Sonora MX, and Angela Gervasi, formerly of Philadelphia, Pennsylvania, a photo-journalist, will be present to share readings of their literary works in both English and Spanish created during their Lowe House Project residency.

The Rio Compartido/Shared River and the Smithsonian WaterWays exhibits will continue until December 1, 2019. After the Rio Compartido/Shared River opening, guests may view the exhibit by appointment or during other events and programming held at the artist residency. The Smithsonian WaterWays exhibit is open for viewing daily at the Tubac Presidio State Historic Park located at 1 Burruel Street in Tubac.

Rio Compartido/Shared River is being made possible with assistance from AZ Humanities, Santa Cruz Community Foundation, Consulate General of Mexico in Nogales, Arizona, Imfoculta CECUN in Nogales, Sonora, Mexico and Friends of the Santa Cruz River.

The Lowe House Project artist residency is 501 (c)(3) non-profit organization fostering the tradition of Tubac: Where Art and History Meet through the arts.