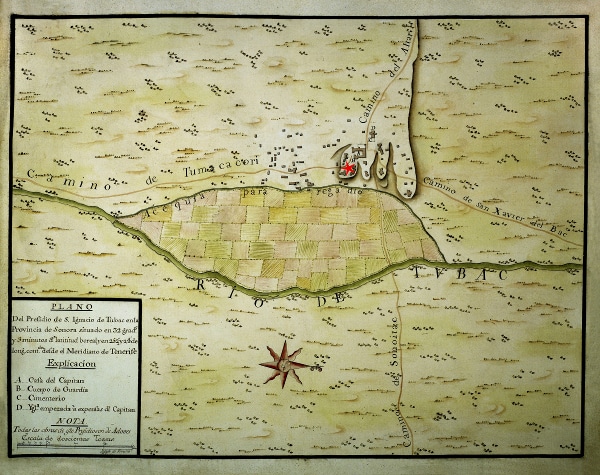 Red marks the location on the map of the family home of Wilhelm Henry Lowe, an immigrant from Hannover, Germany who served in the U.S. Army at Ft. Crittenden, a few miles outside Sonoita, from 1867-1870.

Wilhelm settled down in Tubac and married Espiridiona Sandate in 1877. Together they raised three sons – Albino, William (Guillermo), and James (Santiago) – in an adobe building in the heart of the village of Tubac, which we know and love today as Old Town Tubac.

“I remember the little old post office, the happiest place in town. I recall sorting the incoming mail, placing it in the proper bin under the names of Garrett, Rosenberg, Sinohui, Otero, Coenen, Zepeda, Gastelum… And of course, I remember the home built around the post office, every room of it. I lived there with my parents, William and Anna Lowe, and eight other little Lowes.”

William remained in Tubac and married Annie Burruel in 1902, and together they built a vital, civic-minded life, while raising nine children.

William Lowe served as Justice of the Peace, Selective Service Registrar, Democratic Precinct Committeeman and Commissioner, Postmaster for thirty-five years, and store owner. He had Tubac’s first telephone and telegraph installed in the post office. He owned Las Cienegas Ranch south of Tubac, and equipped their dairy with one of the first electric milking machines. He lost lands during the Baca Float debacle, in company with many other families, but was in a fortunate financial position to buy them back.

Some two hundred fifty years later, the Lowe family home is listed on the National Register of Historic Places and is designated the Historic Lowe House in honor of the multi-generational contributions the Lowe family made to building and sustaining the village of Tubac.

The Tubac Historical Society has extensive archives on the history of the Lowe family and their lives in Tubac. This very brief look at the contributions of William Lowe was made possible by a gift in honor of Daniel Lowe, Jr., grandson of William Lowe. A gift from Daniel’s family on the occasion of his 80th birthday contributed to the ongoing preservation of the Historic Lowe House, where the legacy of the William Lowe family lives on. 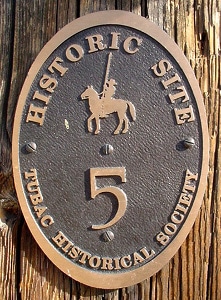