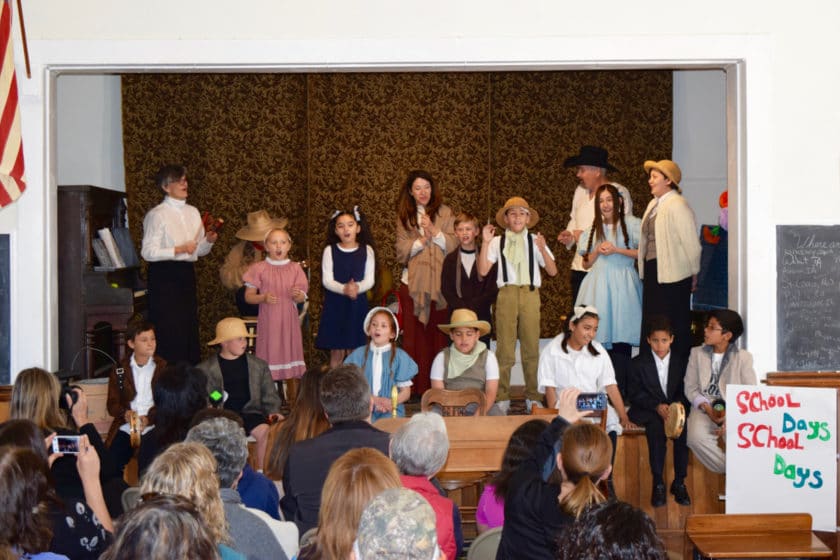 School Days School Days! A grand success beyond our expectations!

Our intention of developing a performance integrating a curriculum based on Tubac’s history and the arts, offering reading, math, drama, and history lessons, as well as awareness of Tubac’s sense of place, cultural heritage, and institutions, was a huge success and engaged the broader community in ways we could not have predicted.

Not only were the Montessori de Santa Cruz students eager to learn of Tubac’s history, under LHP’s artist in residence Sharman Nittoli’s guidance, they sang their hearts out with songs they composed and performed to a very appreciative standing room only crowd.  Parents and other adults volunteered as actors and supported the performance with everything from obtaining costumes to dipping strawberries in chocolate for the reception after.

School Days, School Days not only was a successful educational program integrating history and the arts, it expanded awareness among community members whose heritage shaped the Tubac we know today and honored their contributions. Many had not been to the Tubac Presidio State Historic Park and stayed well after the program and reception to visit the museum.

Everyone was so excited, plans are in the works to develop another residency program featuring the story of young people who were part of the 1775 Juan Bautista de Anza expedition, which started in Tubac and traveled over terra incognita, unknown lands, to found and settle San Francisco. This performance would be in conjunction with Tubac’s celebration of Anza Days in October, 2017.

Meanwhile, we are cherishing the experience, our new awareness and the new friends and collaborations, and according to Montessori de Santa Cruz parents, still singing the wonderful songs all about Tubac Territorial Teachers and Times. An educational video is in the works and DVDs of the performance will be available soon.

Thank you all for your participation and your continued support as we celebrate the tradition of Tubac: Where Art and History Meet!