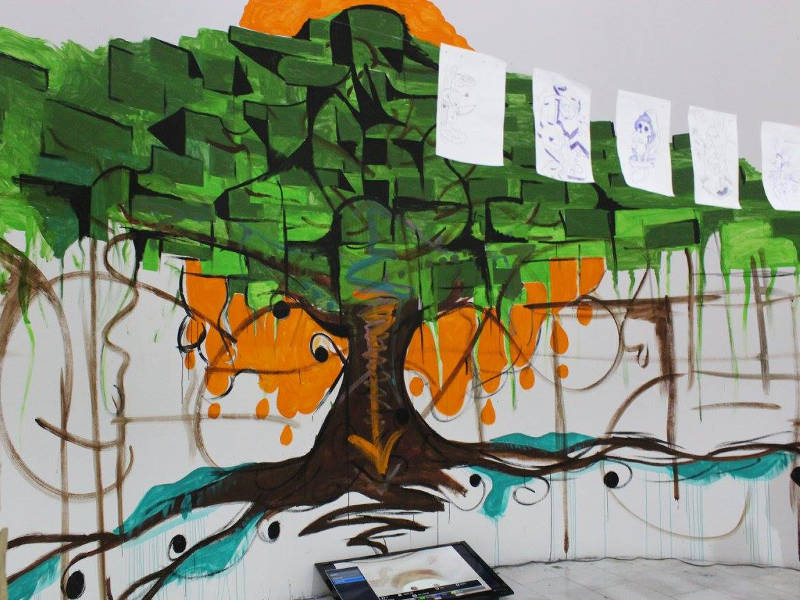 Congratulations to Rio Compartido/Shared River artists Elena Vega and Abraham Limon Guzman for their Lo Que Acarrea El Rio exhibit at the Museo de Arte in Nogales Sonora Mexico! The exhibit and presentation was of paintings and poetry about the Santa Cruz River that they completed during their residency at the Lowe House Project in December. Reigning over it all was a marvelous mural depicting habitat they discovered while hiking along the Santa Cruz River in Tubac on the Juan Bautista de Anza International Historic Trail.

A special thanks to Sherry Sass of the Friends of the Santa Cruz River (FOSCR) who provided our Mexican artists tours of locations along the river corridor, the AZ Humanities who made Abraham and Elena’s two-week residencies possible and to the many Friends of the Lowe House Project who welcomed and supported our artists residents from Mexico and bi-lingual Rio Compartido/Shared River resident Angela Gervasi from Philadelphia for enabling them to produce such fine work.

The Lowe House Project welcomes applications to Rio Compartido/Shared River residencies which are open to qualifying individuals from any nationality and who work in any medium. (See Calls to Artists)

The goal of the Rio Compartido/Shared River program is to bring awareness to the Borderland’s cultural, historical and environmental interweave and complexities relating to the shared flow of the Santa Cruz River. Artwork produced by participating artists will be considered for an exhibit at the Historic Lowe House as a complementary event during the Smithsonian Institute’s WaterWays traveling exhibit scheduled for the Tubac Presidio State Historic Park October -November 2019.